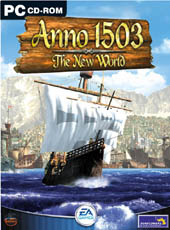 Unavailable
Sorry, this product is not currently available to order
1503 A.D. - Return to the dawn of a New World in an epic saga of adventure and discovery. As a young lad, you have heard tales of opportunity and unimaginable power and fortune in this New World. Now grown up, you are ready to embark on and venture into these unfamiliar lands of the Renaissance world in 1503 A.D. - The New World, an exciting new PC title that blends the excitement of real-time strategy with the depth of empire building.

Players begin their journey by setting sail for a New World in anticipation of seeking out wealth and power and settling a new nation and empire. Along the way, gamers will encounter stunningly-detailed environments in four varying climate zones and compete against computer-controlled players, including interactions with nine different cultures like the Africans, Aztecs and Native Americans. Each race will have their own traits and characteristics, including their preferences as to where they make their kingdom and what sorts of trade goods they prefer.

When a player reaches a critical stage in the game and it is impossible to meet the needs of the population, trading goods and services becomes a vital component within 1503 A.D. - The New World. Economy systems vary depending on location and include goods such as weaponry, raw materials, necessities such as clothes and food as well as more exotic items like silk and spices. Trades can be made several different ways, including an easily accessible trading menu that allows gamers to interact with other races and form peace treaties. However, some cultures may rely on a more offensive, aggressive style of interaction, which can lead to potential conflict.

Throughout the game, real-time decisions are made and it is up to each player to apply the appropriate strategy in order to advance their nation and claim victory. Combat within 1503 A.D. - The New World takes place on dry land as well as at sea, where a players fleet of merchant ships must defend against pirates determined to board and take over your goods. The all-new combat system allows for much more sophisticated tactical preparation and some truly epic land and sea-based battles.

Within each established or newly created empire, 1503 A.D. - The New World employs a unique "visual-feedback-system" as well as hints and tips that will allow players to view the status of their settlements without having to click onto another menu to find the appropriate statistic. For example, if there is not enough food left for everyone, villagers will begin to line up in front of the food stands at the marketplace and riots will ensue if the player does not react accordingly. In addition to the visual feedback, background music will also adjust to the new situation.