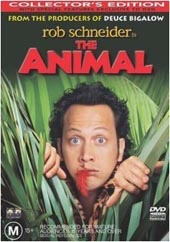 Get set for a comedy of bestial proportions as Rob Schneider, king of the DEUCE BIGALOW jungle, leaps into laughs as a wannabe cop who, after a nasty accident and the highly experiment surgery that saves his life, gains amazing and chaotic animal traits! No villain or joke is safe as Schneider springs, tumbles and snarls his way up the police ladder and into the heart of the beautiful Rianna (played by Colleen Haskell of TV’s SURVIVOR). Also featuring Australia`s own Michael Caton (from the hit THE CASTLE), this maniacal comedy smash is sure to bring out THE ANIMAL in you!!