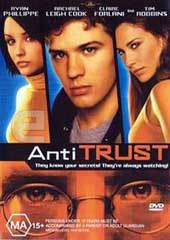 Truth Can Be Dangerous… Trust Can Be Deadly.

After graduating from Stanford, two idealistic computer whiz kids who are best friends are offered jobs at NURV, a giant Portland company with a driven boss, Gary Winston, on the verge of a world-linking satellite communication system. With support from his girlfriend Alice, Milo takes the job; Teddy says no and continues work on a media compression program he wants to make available free.

Winston takes a person interest in Milo, whose genius can help NURV meet its launch date, and Milo responds with brilliance and long hours. When Teddy meets with tragedy and Winston's offhand remark makes Milo suspicious, he decides to investigate Winston and NURV. But, whom can he trust?