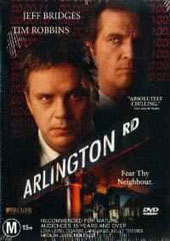 The DVD arrived safely and quickly.It is in very good order and It is an absolute amazing movie – an all time favourite of ours !

Widowed when his FBI agent wife is killed by a right-wing group, college professor Michael Faraday becomes obsessed with the culture of these groups – especially when his new neighbours, the all-American Oliver and Cheryl Lang Tim Robbins and Joan Cusack), ststart acting suspiciously. With each twist, the mystery deepens and the question looms – is Faraday just consumed by fear and driven by paranoia, or has a lethal conspiracy been born on Arlington Road?