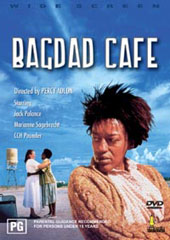 Unavailable
Sorry, this product is not currently available to order
It's just a greasy spoon and a rusty gas pump, but for Jasmin (Marianne Sagebrecht-SUGARBABY, WAR OF THE ROSES), a German housewife on holiday who's dumped her husband in the middle of the Mojave, Bagdad Cafe appears as an oasis amid the dunes. Until, that is, she checks into the cafe's ramshackle motel and tangles with its bad-tempered owner. Brenda (CCH Pounder- PRIZZI'S HONOR, FACE/OFF) is sloppy, loud, and overworked, with too many kids and no patience for strangers. Armed with a mop and a magic kit, Jasmin transforms this desolate dump into a popular roadside attraction. She also manages to attract the attention of Rudi, (Jack Palance- SHANE, and Academy Award Winner of CITY SLICKERS) , an ex-set decorator from Hollywood who wants to paint her picture. BAGDAD CAFE is an offbeat comedy about mismatched characters who find paradise off the beaten track. Special Features:
Release date Australia
January 1st, 2001
Stars
Length (Minutes)
85
Aspect Ratio
Language
English
Supported Audio
Studio
Vendetta
Genre
Movie Format
DVD Region
Edition
Original Release Year
1988
Product ID
1459890