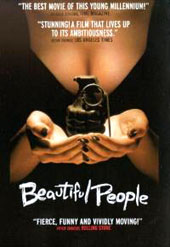 Beautiful People pursues five apparently separate London stories which eventually intersect and, in a couple of cases, merge. There's a young doctor whose upper-class, Tory backbencher father is having difficulty adjusting to her Bosnian boyfriend, an amiable obstetrician experiencing his own domestic strife and a severe lack of sleep; and a school teacher facing his fiftieth birthday under the cloud created by his wayward soccer obsessed son, while his wife struggles valiantly to keep the peace.