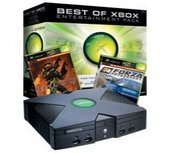 Unavailable
Sorry, this product is not currently available to order
The Best of Xbox Entertainment Pack features an Xbox console and controller, and two of the hottest games ever made: Halo 2 and Forza Motorsport.

Xbox is Microsoft's future-generation video game system that delivers the most powerful games experiences ever. Xbox empowers game artists by giving them the technology to fulfil their creative visions as never before, creating games that blur the lines between fantasy and reality. The Xbox console and controller are designed to capture the power and performance that Xbox will deliver and are based on the input of more than 5,000 gamers and games creators from around the world. FEATURES:
Release date Australia
October 20th, 2005
Game Platform
Publisher
Microsoft
UPC
882224096393
Product ID
1476474