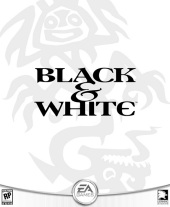 Unavailable
Sorry, this product is not currently available to order
This special priced bundle includes the Logitech iFeel mouse with Black & White.

Bonus:
Pre-order Black & White from GameZone you will go in the draw to win $1000 worth of prizes!:

Runner Up Prize Packs:
We also have four prize packs of: Clive Barkers: The Undying plus a Black & White Cap for four other lucky gamers. Value: $129.95.

Day One Shipping!
All pre-orders will be delivered on the official release date (allow an extra day for rural deliveries). This means you will get the game delivered to you the same day it hits the stores.

Review:
"Any fears you may have had about Black & White not fulfilling expectations can be dispelled. After three long years of waiting, Peter Molyneux and Lionhead Studios have unleashed the most original game ever devised for the PC.

There really is nothing that approaches the ideas or standards that this game sets. Giants: Citizen Kabuto is probably the closest in terms of scale and the freedom to explore your surroundings, but compared to B&W even that seems limited and uneventful. Overall, B&W is as captivating as it is ingenious. Buy it right now, or miss out on one of the most significant moments in PC gaming history." - www.pczone.co.uk -- 95% "Pure genius".

Game Features:
Black & White is a strategy game packed with the sort of unique features that PC gamers have come to expect from a Peter Molyneux title.

Dotted about the landscape are tribes of human-type creatures. From a perspective high above the clouds you can zoom in to watch these individuals going about their daily business. Just by observing them, you will find they live ‘natural’ lives with virtually every aspect of village life built in. Not only will the villagers plough, hunt and fish, but they will visit friends, play games, fall in love, get married… A full range of natural behaviours are designed into each tribe.

The tribes are an integral part of the game. There will be a large number of different tribe types, based on parallels from past and present history: Japanese, Tibetan, Red Indian, Greek, Zulu, Cossack and so forth. Each has its own particular purpose in the game. And within the game, the tribesmen will be particularly impressive. An incredibly large number of individuals might appear on-screen at any one time.

The player starts by ‘converting’ the villagers in an attempt to persuade them to worship you. Once they have become your loyal followers, they can be used to perform a vital function. By summoning them to your Citadel, you can have them perform strange and elaborate worship rituals in your honour. And as they dance around the Citadel praising your name, they are generating lifeforce; the essential ingredient for the magic spells you will soon be able to cast.

Each tribe is capable of producing lifeforce of a specific type. A vast number of spells will be written into the game, each being unique to its particular tribe.

The alignment of spells vary from pure good to pure evil and everything in between. The choice of which spells you want to use is entirely yours to make. However, your choices are monitored carefully throughout the game. The more magic of any particular alignment you choose to use, the more your environment will gradually alter to reflect this fact. If you tend towards using evil magic (destructive, fear-invoking spells), your homelands will physically alter in accordance with this. Your citadel will become dark, angular and foreboding; the surrounding green fields will become black and charred. Your followers worship you out of fear. But if your preference is good magic (protection, healing etc. spells), your citadel will gradually come to resemble a fairytale palace, with the surrounding lands bright and colourful – perhaps even nauseatingly so. And your loving followers will dutifully obey your every command.

Playing Black & White will be like taking a huge personality test. The results will reflect the sort of games player you actually are. And the way you choose to control your land is reflected in the game by a corresponding evolution of your own territory.

You are not alone in this game. At the start, whilst you expand your territory, a number of other sorcerers are creating their own power base. Ultimately you will clash. In these battles, your weapons are your magic spells.

When magic battles between sorcerers arise, the game comes to life. Thunderclouds roll across the skies as lightning bolt attacks are directed at opponents’ villages. Armies of skeletons are summoned who stride across the countryside scything everything – and everyone – in their paths. Earthquakes tear the ground apart.

The way magic is handled in Black & White is revolutionary in two ways.

Spells directed against you can be anticipated. You always have time to react to spells. And time to cast an appropriate counter-spell in time.

Lionhead have developed a new technology – ‘Gesture Recognition’ technology – which allows spells to be cast, practised and perfected by mouse movement. To cast a firewall, for example, you must sweep the mouse in a circle. From this gesture, Lionhead’s GR technology can sense the type of spell you wish to cast and (according to how accurately the spell was executed) determine how strong it was.

Your worshippers are all-important in that they provide the lifeforce (energy) you need to cast spells. In the heat of battle you can order your followers to increase their worship rituals. The more frenzied the dancing and chanting, the more energy they will provide for you. But when you push them too hard, some will be unable to maintain the pace and will die in the process.

There is one type of magic which does not rely on your followers. The magic cast by your familiar. In Black & White, you have various roles. As a ruling overlord you must manage your tribes of followers as you see fit. As powerful sorcerer you must practice and perfect your spell-casting technique. There is also one other major area in the game which will demand your careful attention. You must take on one further role - as responsible parent.

By plucking any living beast you might find in the game-world and dropping it into your citadel, this unfortunate creature goes through a magical transformation. Like a child, it begins to grow. It grows. And grows… By the time it reaches adulthood, it will have transformed into a gargantuan creature towering above the tribesmen, able to flatten a whole village with a single footstep. Exactly how it conducts itself as it strides across the countryside will depend on how you have raised it.

As you may choose to use good or evil magic, you may also choose to raise your titanic familiar to be good or evil. This you must do in training sessions whilst the game progresses. As you might with a growing child, you must punish it when it does anything wrong and reward it when it acts correctly. If the creature is hungry and stuffs its mouth full of tribesmen, you will probably reward it if these tribesmen are followers of a rival sorcerer. If they are your own, people, you will thrash it. Gradually the creature will learn what it may and may not do.

Another important aspect in the education of your growing creature is its magical ability. Your creature will learn to perform only those spells you have taught it. In battles between sorcerers, this is all-important. When the spells are coming thick and fast, relying on your exhausted worshippers may not be possible. But your creature casts spells created with its own source of lifeforce.

Black & White is a cross-genre game which involves resource management (in this case human resources), spellcasting skills which rely on dexterity and practice, battle strategy and parenting skills. The game is played in real time and will accommodate multiplayer play over networks and internet play. Another original feature is that your creatures are portable, from single player game to Internet game and back. Thus you may train your creature in the comfort of your own home before taking him off to an Internet game.
Release date Australia
March 27th, 2001
Game Platform
Media Format
PC DVD-ROM
Product ID
1456016