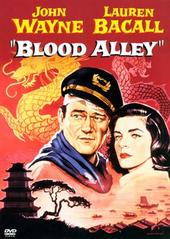 “A Vigorously Directed Action Picture.” – Clive Hirschhorn, The Warner Bros. Story “Powder your nose, baby,” the craggy-voiced skipper bellows. “We're coming into Hong Kong.” Getting there wasn't easy for wily Merchant Marine Capt. Tom Wilder. But it's exciting – and all an action fan might expect from a movie teaming legends John Wayne, Lauren Bacall and director William A. Wellman.

Wilder braves dangerous waters and pursuing Red Chinese forces while steering a boatload of Chinese refugees and a doctor's daughter (Bacall) along a 300-mile waterway to freedom's shores. Wellman and his crew cram the Cinemascope frame with riches both scenic (Northern California locales authentically stand in for the Formosa Straits) and action-packed. This ship is under full steam. Destination: Blood Alley!