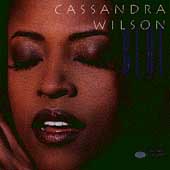 Possessed with both a spirit of innovation and a sultry, textured voice that lends itself to any number of styles, Cassandra Wilson was one of the most exciting vocal talents to gain prominence in the 1990s, and her '93 Blue Note debut, BLUE LIGHT 'TIL DAWN, may be her finest moment. Though Wilson's earliest albums specialized in the jazz fusion characteristic of the M-Base collective (a Brooklyn-based group of musicians to which she belonged), BLUE LIGHT finds her bringing her skills to a set of acoustic standards and covers with a rootsy, blues-based feel.

The choice of material is eclectic, with Ann Peebles's "I Can't Stand the Rain," Van Morrison's "Tupelo Honey," Robert Johnson's "Hellhound On My Trail," and two of Wilson's originals in the mix. This is vintage wee-small-hours music: moody, spacious, atmospheric, with Wilson's deep, evocative voice curling up like a train of smoke through the darkness. Beautifully conceived and performed, BLUE LIGHT 'TIL DAWN is a quiet masterpiece, and one of the best vocal jazz albums of the '90s.

Rolling Stone (3/24/94, p.93) - 3 1/2 Stars - Very Good - "...surround[s] a handful of Wilson's own songs with selections from more contemporary writers and break[s] exciting new ground with two selections from the Delta blues songbook of Robert Johnson...."
Entertainment Weekly (11/12/93, p.65) - "...Wilson makes the strongest impact yet on [BLUE LIGHT 'TIL DAWN]...Wilson's husky voice hums and shivers with a dry, evocative soulfulness..." - Rating: A-
Down Beat (12/93, p.47) - 5 Stars - Excellent - "...Wilson's strongest most consistent recording....creates a new environment for her distinctive vocals: acoustic, open and earthy....she sees beyond distinctions of style and genre...BLUE LIGHT should win her many new admirers...."
Vibe (9/93, p.134) - "...waxes nostalgic for the days when black romance meant more than `I Want A Gangsta Bitch' and throws some new twists into our conception of jazz standards..."
Musician (1/94, p.90) - "...A hushed masterpiece of torrid romanticism, [BLUE LIGHT 'TIL DAWN] is at once [Cassandra Wilson's] most assured and daring album to date..."
Village Voice (3/1/94, p.5) - Ranked #34 in the Village Voice's 1993 Pazz & Jop Critics Poll.
Stereo Review (2/94, p.134) - "...her improvisational skills are formidable, and she can take a song and mold it sensuously into pure poetry...Cassandra Wilson is a captivating, musical storyteller..."