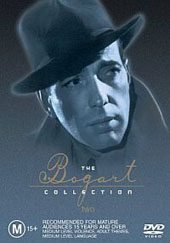 Due to COVID-19, we're unable to accept new orders at this time. Learn more...
Collectors Edition Bogart Set including Big Sleep, Dark Passage, Key largo, Treasure of Sierra Madre. Big Sleep Private-eye Philip Marlowe is hired to keep an eye on General Sternwood's youngest daughter, Carmen, who has fallen into bad company and is likely to do some damage to herself and her family before long. He soon finds himself falling in love with her older sister, Vivien, who initially takes a deep dislike to Mr Marlowe. However, the plot thickens when murder follows murderâ€¦ Dark Passage Bogart plays a man convicted of murdering his wife who escapes from prison in order to prove his innocence. Bogart finds that his features are too well known, and is forced to seek some illicit backroom plastic surgery. The entire pre-knife part of the film is shot from a Bogart's-eye-view, with us seeing the fugitive for the first time as he starts to recuperate from the operation in the apartment of a sympathetic young artist (played by Bacall) for whom he soon finds affection. But what he's really after is revenge. Key Largo Frank visits a rundown hotel run by crippled James Temple and his daughter-in-law Nora, widow of Frank's friend from the war. The hotel has been taken over by Johnny Rocco and his gang. Frank is indifferent at first but Rocco's treatment of his alcoholic mistress Gaye and his murder of two Indians convinces Frank that Rocco must be stopped. His only chance comes when Rocco forces Frank to pilot the gang's boat toward Cuba. Treasure of Sierra Madre Dobbs and Curtin meet up in Mexico, and go to work for a contractor, MacClane, who takes them away to remote site and tells them they will be paid when the job is finished. When they are finished, they return to town to find MacClane to get their wages. MacClane gives them a few dollars, and says he'll just go to the bank and pick up the payroll for them. Dobbs and Curtin then meet up with an old prospector, who claims the hills are still full of gold, and if they can get the cash, he'll go with them. They eventually get the cash from MacClane after a little "persuasion", and all three set off for the hills as good friends, but will they return that way ?
Release date Australia
April 14th, 2004
Actor
Language
English
Studio
Warner Bros.
Movie Format
DVD Region
Edition
UPC
9325336017678
Product ID
1463183