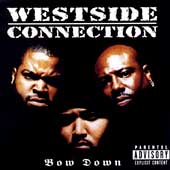 Fall 1996, the height of the East Coast, West Coast beef. A lot has occurred around this time. Mainly the murder of Tupac Shakur, and that one showed the fuel of the beefs. Add that to a lot of shots fired from the east to the west, in the midst of the controversy. Given that there was some shots fired from the west to the east (mainly Tha Dogg Pound's “New York, New York”). Here, Ice Cube, WC, and Mack 10 take things a step further with their gangsta rap topics, and their anti-east coast lyrics. The trio even diss other rappers from the west who sides with the east, so you know that it was going to be intense.

Most of the tracks here are highly straight forward, with the lead single “Bow Down”. I personally think that is the weakest track on this album, which doesn't say much, because the other songs here are great. The second single “Gangstas Make The World Go Round” is one of my favorites. Going along, they take their shots at NY with “All The Critics In New York” is shows off anger (Ice Cube shouts “Why you talkin' loud? What you talkin' ‘bout?). With the track "Do You Like Criminals?” the trio shows their toughness on that track, along with affiliate K-Dee. Ice Cube takes a funny shot at singer El Debarge (“Do you want a mf thats hard/ or a b****-made as cute as El Debarge”). The album gets a little darker with the track “The Gangsta, The Killa, and The Dope Dealer”. The diss tracks to other rappers begin with “Cross 'Em Out And Put A K” where W.C. takes a shot at ATCQ member Q-Tip, while Cube and Mack 10 focus their lyrics on Cypress Hill. The Cypress Hill lyrical assault continues on “King Of The Hill” where Cube and Mack 10 holds nothing back, making the song another highlight of the album. “Westward Ho” and “Three Time Felons” are good songs as well, with great subject matter. The final track “Woo-Bangin’ (WSCG Style)” features west cost members K-Dee, The Comrades, and AllFrumThaI. The song is a great west coast posse cut, where Cube disses Chicago rapper Common.

The Westside Connection's first album is great for all west coast gangsta rap fans. It shows the great chemistry between Ice Cube, Mack 10, and W.C. If you're one of those who live and die for east coast rap, stay far away from this album, because you'll will be not happy. Given that each member has had great solo careers before and after this album, this shows you what can happen when superstars come together. Personally, it falls short of a classic, but will remind you that the west coast still had things together back in '96. Peace.

Lyrics: A+ Production: A+ Guest Appearances: A- Musical Vibes: A

Gangsta Rap, from some gentlemen who know a thing or two about the style.

Ice Cube, W.C. and Mack 10 are the core of this outfit, and the tracks cover the usual subjects: urban violence, drug dealing, and general anti-establishment behavior. The sound is west coast all the way, with flowing, quick-tempo raps over sparse, repetitive beats. Few surprises here musically; "Bow Down" is typical of the lot, as the crew demands respect from those who would dare to challenge their supreme authority as rappers, gangsters, and Mack Daddies. There's also some coastal rivalry here: in "All the Critics in New York" Cube voices his displeasure with the rappers he used to respect, but who now criticize and, even worse, imitate him. This is raw, straight-up urban music, not for young children or the faint of heart.