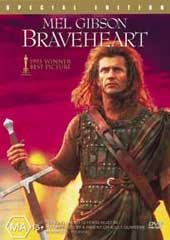 Tells the story of the legendary thirteenth century Scottish hero named William Wallace (Mel Gibson). Wallace rallies the Scottish against the English monarch and Edward I (Peter Hanly) after he suffers a personal tragedy by English soldiers. Wallace gathers a group of amateur warriors that is stronger than any English army.

Braveheart is a rich, emotionally charged historic epic filled with passion, betrayal and courage. Its scope and pageantry make it a true achievement in filmmaking history.