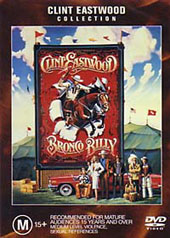 As the leader of a struggling Wild West show, Bronco Billy (Clint Eastwood) gives it his all to keep his entertainers' spirits high despite the declining public interest. While on tour, Billy encounters Antoinette Lily (Sondra Locke), a spoiled, newlywed heiress who was recently deserted by her scheming husband, John Arlington (Geoffrey Lewis). After some convincing, Lily decides to join the troupe as Billy's assistant but, much to the crew's displeasure, she seems to bring only bad luck.