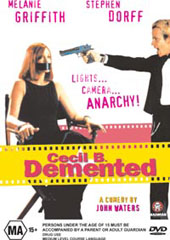 Unavailable
Sorry, this product is not currently available to order
Demented forever!

With a hilarious swipe at the underside of the film industry, Melanie Griffith, Stephen Dorff and Alicia Witt star in John Water’s madcap comedy Cecil B Demented - an insane tale of a young lunatic filmmaker (Dorff) and his gang of film fanatics, the “Sprocket Holes”. The Sprocket’s goal is to kidnap A-list Hollywood movie goddess Honey Whitlock (Griffith) and force her to perform in their own underground movie. Every inch a star, Honey’s career is at its peak, but her personal life is in disarray. Forty years old and divorced, she is still beautiful, rich and talented, and is on every producer’s short list despite her reputation as a diva. Agreeing to appear at her latest film’s international premiere in Baltimore, she has no idea she is about to meet the most demanding director of her career.

"What is truly great about Cecil B. Demented is the fact that it takes potshots not only at films, but at film audiences." -- Brian Matherly, DAILY-REVIEWS