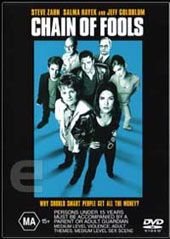 Hilarious indie star Steve Zahn plays Kresk, a depressed barber who is experiencing a string of bad luck. His life is taking a tailspin for the worse, and Kresk is even considering killing himself and ending his misery. Then Kresk comes across a treasure trove of valuable coins. It turns out the coins are stolen and Kresk becomes the center of a maelstrom of characters all looking to get their hands on the coins, including a hired thief named Avnet (Jeff Goldblum).

The increasingly puzzled barber is a little bit out of his league and to make matters worse he falls in love with Sgt. Meredith Kolko (Salma Hayek), a police detective and former centerfold who is trying to find out who's responsible for the theft of the coins. A series of catastrophic moves follows – Kresk hires a hit man (Elijah Wood) and realizes that his nephew has swallowed the rare coins.