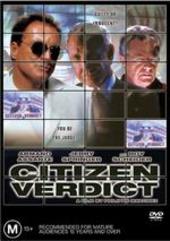 Watch, vote, and execute…all in the name of justice In the vein of “Network”, Armand Assante (Lords of Flatbush, Striptease, Mambo Kings) and Jerry Spinger (TVs The Jerry Spinger Show) star in this media satire...... MARTY ROCKMAN (Jerry Springer), the notorious producer of the hit reality-TV show “So Sue Me”, has a brand new concept: “CITIZEN VERDICT”. Each week a real criminal case will be tried before the American people, but this time theyre also the jury – and if the defendant is voted guilty in a death penalty case, Rockman will televise the execution.

An escalation in violent crime and terrorism has hit the state of Florida hard. GOVERNOR TYLER (Roy Scheider), desperate to be seen as a tough-on-crime Republican leader in the upcoming Presidential race, decides to give Rockman his chance, and “Citizen Verdict” goes into production in Tampa.