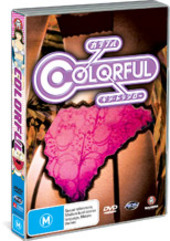 Roses are red. Violets are blue. This show is about panties.

From hotties on subways and perverted cabbies, to panty-obsessed video geeks, sexy mall babes, and the furry phenomenon, Colorful! is a strange, deranged, racy and hilarious parade of perversion! And if live action is more your style, check out the behind-the-scenes documentary that shows the twisted, demented cast and crew that bring Colorful! to vivid life!