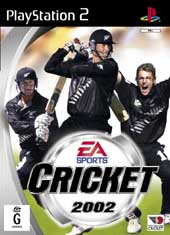 Due to COVID-19, we're unable to accept new orders at this time. Learn more...
This title is 2nd hand and includes the case, manual and CD. All second hand games are 100% guaranteed.

Cricket has taken the leap onto the next generation console, the Sony PlayStation2, and proves itself to be the definitive Cricket game of all time! Crickets evolution to the PlayStation 2 has meant an incredible leap in just about all areas of the product. Detail in stadiums, players, player faces, ball physics, team AI, pitch details, pitch physics and player options have all seen majore improvements.

- Simple and intuitive controls improving on the best features from previous cricket games. Batting control includes the ability to charge the bowler, and bowling includes spin, seam and pace control.

- Huge 3D stadium sound effects based on real crowd sounds from all over the world. Crowd effects change to reflect peaks and troughs in the game.

- TV style gameplay including TV overlays and a detailed replay feature allowing hte player to view the action from an infinite number of camera angles (including of course stump cam and helmet cam).

- Player Editor allows players to change the features of current team members to your own local team.

- Flexible play allows the player to be fully involved in the selection of batsmen and bowlers, the placing of fielders. Chose manual fielding, or simply let the intelligent AI position your fielders for you.

- All the international teams and players.

- Astonishingly high detail in the players faces and bodies. The equipment, such as bats, gloves and pads, also feature incredible detail.