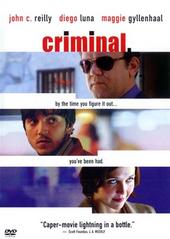 Think of them as working men who work the angles. Rodrigo is the rookie. Richard is the mentor who knows crime like a book. But a new book is about to be writtenâ€¦ The film is an English-language version of the Argentine hit “Nine Queens” (2000) by FabiÃ¡n Bielinsky. John C. Reilly, Diego Luna and Maggie Gyllenhaal navigate the con-or-be-conned world of the L.A. grift in a clever caper directed by Gregory Jacobs and produced by Jacobs, George Clooney and Steven Soderbergh.

A $750,000 onenight score awaits Richard and Rodrigo if they can flimflam an antique currency collector (Peter Mullan) – a ruse soon packed with more twists than a box of pretzels. For suspense, surprise and a wow ending, watch this Criminal!