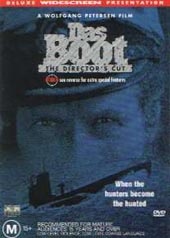 Best submarine movie ever made!

That's right if you even have a remote interest in what submarine crews had to endure or in WW2 naval warfare then this movie is it. You really see why the men fighting in the german U-boats had the highest manpower losses in proportiion to all the other german services in WW2.

You really feel the boredom of most of the cruise then followed by intense action, then the scary depth-charging. All in wonderful 5.1 english sound.

The finale of this movie is the boat having to make a dash through the straight of Gibralter into the mediterranean.

If you ever own a submarine movie this is the one to own!

Buy this and The Hunt For Red October for a pre and post nuclear sub collection. You will need no others.

I'd searched long and hard for this movie, hearing about it from a friend. When I finally got my hands on it I sat down and turned it on. It was a riveting story about a submarine crew fighting for survival during the long hard years of the war and the camaraderie they showed.

I thoroughly enjoyed it and hope you will to :)

Autumn, 1941 Fourty three young German sailors aboard U96 enter the war against Britain seeking adventurre, respect and heroism. For them, this voyage is for glory. For their captain, a seasoned war veteran at the young age of thirty, it is a mission against enemy destoyers in a bloodred sea that can devour a ship and its crew without leaving a trace.

Wolfgang Petersens unforgettable epic, is now available as you've never seen, felt or heard it before. The Director's Cut features Digitally Re-Mastered sound and image, over an hour of never-before seen footage and is more breathtaking than ever, proving to be one of the most powerful movies ever made.

This is the restored, director's cut of Wolfgang Petersen's ha­rrowing and claustrophobic U-boat thriller, which was theatrically rereleased in 1997. Originally made as a five-hour miniseries, this version devotes more time to getting to know the crew before they and their stoic captain (Jürgen Prochnow) get aboard their U-boat and find themselves stranded at the bottom of the sea. Das Boot puts you inside that submerged vessel and explores the physical and emotional tensions of the situation with a vivid, terrifying realism that few movies can match. As Petersen tightens the screws and the submerged ship blows bolts, the pressure builds to such unbearable levels that you may be tempted to escape for a nice walk on solid land in the great outdoors–only you wouldn't dream of looking away from the screen. –Jim Emerson