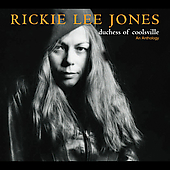 While it's baffling that there was no Rickie Lee Jones anthology before 2005's DUCHESS OF COOLSVILLE, this remarkable box set more than makes up for the absence. Co-produced by Jones herself, the three-disc Rhino compilation remains in line with the singer/songwriter's idiosyncratic aesthetic in the way it cleverly careens through her career. The first disc alone shifts from 2003's THE EVENING OF MY BEST DAY to 1993's TRAFFIC FROM PARADISE, then later presents a trio of songs from Jones's acclaimed self-titled '79 debut, before landing briefly on her 1997 trip-hop album, GHOSTYHEAD. Yet the set flows wonderfully, revealing the consistent quality of Jones's ever-changing musical vision.

Plenty of Jones's best songs are here, including her only true "hit," the poppy "Chuck E's in Love," and "The Horses," a beautiful ode to her daughter, co-written with Steely Dan's Walter Becker. For the Jones faithful, the third disc is the real revelation, since it includes a slew of previously unreleased live tracks and demos, in addition to collaborations with Dr. John, Bill Frisell, the Blue Nile, and others. Ideal for fans and newcomers alike, DUCHESS OF COOLSVILLE represents the full breadth of Jones's artistry.