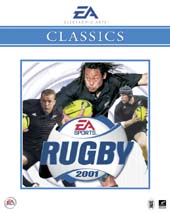 Unavailable
Sorry, this product is not currently available to order
EA SPORTS presents the first internationally licensed Rugby Game, creating the most complete and compelling rugby experience - including the passion of Eden Park, the majesty of Twickenham and the pride of Ellis Park. Rugby 2001 takes you into the depths of the action, from the biggest bone breaking hits, to the deftest of side-steps. Combined with virtual stadium technology and the inclusion of the real life player and team characteristics, kits and statistics, theres simply no way to get closer to the action.

This is the first internationally licensed rugby game featuring all the teams and stadia of the 1999 Rugby World Cup together with Bledisloe Cup and Tri Nations tournaments.

Features:
20 real international teams and real players - Over 600 players with statistics taken from the RWC99 competition

Realistic player likenesses - Uses an identikit style technique for the creation of realistic likenesses of actual players including; build, height and player numbers.

Realistic weather and pitch effects - Dynamic wear and tear/scuffing of the pitch depending on weather and degree of use.

Dynamic dirtying of players - Players will get dirty when they fall over - only the area that comes in contact with the ground will be affected.

23 real stadiums from around the world - This is all the stadia from the official World Cup plus selected stadia from each region in the southern hemisphere.

Multiplayer - 2-4 players can play on a single computer

Reviews:
"Rugby 2001 is the best rugby simulation I've ever seen, and is one of the most accurate and real-to-life sports games available. Featuring motion-capture-animated player models, 3d-accelerated graphics, and an incredibly realistic physics model, Rugby 2000 looks and behaves fantastically. As far as its replication of the sport itself is concerned, Rugby 2001 truly is rugby for rugby fans. That's not to say that assimilation of the IRB Rulebook and the Rugby 2001 Instruction Manual is a requirement before loading the game; Rugby 2001 manages to be entertaining with absolutely no knowledge of how to play! When I first got my hands on Rugby 2001 I spent the first half an hour thrashing (pressing every control key in random combinations as fast as possible) and I STILL managed to string together some entertaining plays and have a good time. And after a bit of research and practice... oh boy!....

While the list of options available to you may be a mile long, the list of buttons you have to push to ACCOMPLISH those functions is blissfully short, making for a game that is enjoyable right from the word go - as I said earlier on, you don't have to memorise the instruction manual to have a good time, and it's that intangible "complex but simple" quality that makes Rugby 2001 a great GAME rather than just an accurate simulation. " - www.playnow.com.au - 9/10.
Click here to read the whole review.