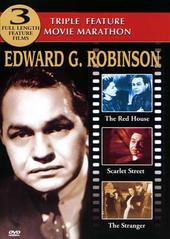 Unavailable
Sorry, this product is not currently available to order
THE RED HOUSE: Edward G. Robinson stars as Pete Morgan, an honest small town student who finds after school employment with local farmer Nath Storm (Lon McCallister). Things go awry for the sedulous Pete one day, when he takes a short cut home through haunted woods. Storm warns Pete to stay out of the woods and away from THE RED HOUSE within. Unwilling to buy into the supernatural hocus pocus, Pete enlists the help of Storm’s fresh-faced and innocent daughter, Tibby, to help him solve the mystery of THE RED HOUSE. Director Delmer Daves only endeavor into the horror genre, THE RED HOUSE starts out slow, but ends with a bang. Young Julie London is swooning as the virginal Tibby and McCallister's expressions of madness and trepidation seem absolutely authentic. Miklos Roza’s score is perhaps the most fun, as it prominently features the Theremin: an instrument played without touch often heard in early sci-fi films. SCARLET STREET: In this remake of Jean Renoir's controversial 1931 film, LA CHIENNE, Christopher Cross (Edward G. Robinson), a quiet, staid cashier and dedicated Sunday painter, feels consumed by passion for the first time in his life when he meets pretty, manipulative Kitty. The two become involved, but Kitty is really in love with petty crook Johnny. She keeps Christopher around simply for his money. In order to impress his precious mistress, Cross embezzles funds from his employer. He doesn't realize, however, that Kitty and Johnny are also getting rich on his paintings, which are becoming a huge success under Kitty's name. When Christopher's theft comes to light, he loses his job and his dignity. And when he seeks out Kitty for solace, he discovers her in Johnny's embrace. The film explodes in its violent climax, and with it Lang creates perhaps his most chilling Film Noir work. The tightly structured story and the evocative paintings that lie symbolically at the center of the plot create a visual and psychological atmosphere of suspense, filled with double meanings and games of representation and appearance, all pointing toward a brutal final act, motivated by Cross' inner demons and repressed emotions. THE STRANGER: Orson Welles directed and stars in THE STRANGER, a tense black-and-white thriller that Welles made for maverick producer Sam Spiegel. Welles portrays Charles Rankin, a respected academic at a prominent Connecticut college. He seems to have the perfect life: a beautiful new wife, Mary (Loretta Young); and a charming home in a small town that holds him in high esteem. Enter Mr. Wilson (Edward G. Robinson), a detective on the hunt for Nazi war criminal Franz Kindler. The appearance of Mr. Wilson threatens to reveal that underneath this idyllic veneer is a secret that could tear everything apart. Although many of Welles's most interesting scenes wound up on the cutting-room floor when producer Sam Speagle reedited the film, THE STRANGER is still a multilayered, complex, and fascinating film. The scenes between Welles and Robinson are intellectually gripping, leading up to the stylized, shocking conclusion. As with so many of Welles's films, he was unhappy with the final result, but the viewer won't be. It would be most interesting to see the film as Welles intended it to be, but in the meantime, this version of THE STRANGER is a marvel of wonder.
Release date Australia
September 22nd, 2005
Movie Format
DVD Region
Edition
Aspect Ratio
Director
Fritz Lang
Language
English
Stars
Studio
Madacy Entertainment
Subtitles
English
Supported Audio
UPC
9311532384027
Product ID
1472644