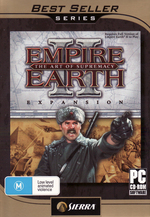 Unavailable
Sorry, this product is not currently available to order
Empire Earth II: The Art of Supremacy will return gamers to the front lines of the greatest battles in history with new civilizations at their command, new campaigns and a host of new features that make this year's best strategy game more addicting than ever. Bold victories on far-off battlefields, from wintry Russian plains to scorching African deserts, will establish the player's undisputable reputation as the world's greatest leader - past, present and future.