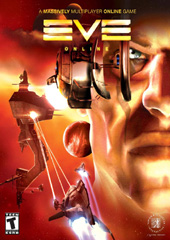 Unavailable
Sorry, this product is not currently available to order
EVE is a world far away from mankind's original habitat, planet Earth. How far away, and where, no one knows. Humans got there through a natural wormhole, and gazing upon a sky never before seen, were completely unable to determine the whereabouts of this new world. From the system of New Eden, where the gate of EVE that once led to the old world lies, humans expanded in all directions at a great pace, exploring and colonizing.

Then, seemingly out of the blue, the EVE gate collapsed in an apocalyptic catastrophe of a scale never before witnessed by the human race, ruining the New Eden system in the process. Thousands of small colonies were left in isolation to fend for themselves. For millennia they endured on the brink of extinction and only a handful survived.

Of those surviving colonies, 5 were to rise up and become the major empires that hold between them the balance of power in the world of EVE today. These are: the Amarr Empire, the Gallente Federation, the Caldari State, the Minmatar Republic and the Jovian Empire, plus several small independent factions and states.

For more than a century the five empires have lived together in relative peace. They've strived hard to maintain this peace, as each of them realizes only too well the grave consequences of a massive inter-stellar war. Recent technological breakthroughs in FTL travel, and the ensuing increase in space travellers, has shaken, but not broken the fragile peace - at least not yet.
Thousands of players can exist within the EVE universe simultaneously!