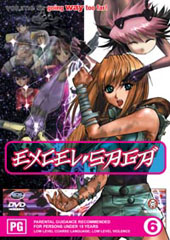 As usual Excel Saga is as crazy as ever but the final volume might be the craziest volume yet as the series tries to make a serious plot to end the story. If you don't like serious stuff the real final episode chucks out all the seriousness from the earlier episodes and decides to parody all the things that usually get banned from t.v. such as extreme blood and nudity. To warn you episode 26 actually was banned from t.v. in Japan. If you enjoyed the rest of the series definately get this, if you have never seen Excel Saga before go and find the first volume to see if you enjoy Excel's craziness.