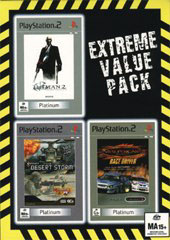 Due to COVID-19, we're unable to accept new orders at this time. Learn more...
This Extreme Value Pack contains three top selling games: Conflict Desert Storm, Hitman 2, and V8 Supercars. Conflict Desert Storm Conflict: Desert Storm lets you take charge of the best known and most feared special operations forces in the world: the Elite British SAS or the US Delta Force squads. Comprising a team of the toughest and most highly skilled soldiers in their field, each squad contains a dedicated team leader, a heavy weapons and demolitions expert, a specialist in infiltration and electronics and a deadly sniper. Based on actual events during the Gulf War, Conflict: Desert Storm places you in the midst of real war environments. Highly covert missions take you through hostile environments where only your expertise in stealth, tactics and firepower will ensure success and the safety of your squad. Hitman 2 Hitman 2 will improve on the original in every conceivable way. The game offers a variety of ways to complete a mission, 1st and 3rd person perspective, mid-mission save options, a new ranking system and a revised inventory system that allows you to acquire and carry weapons and equipment from mission to mission. Codename 47 is armed with an arsenal of over 30 weapons such as pistols, sub-machine guns, shotguns and sniper rifles. You also have access to new non-lethal weapons and pacifying gear including chloroform, poison darts, stun guns and fibre wire for garrotting. Missions take place in countries across the globe and each location features inhabitants speaking in their native tongue. To further heighten the dramatic atmosphere the game's music has been composed and performed by the Budapest Symphonic Orchestra. V8 Supercars Exhaust drifts across the asphalt as engines roar and tyres scream their impatience against the red-hot surface. Sunlight sparks off the bodywork of the touring cars drawing up to the grid and on the track ahead, heat shimmers transform the raceway into treacherous pools of quicksilver. As a car pulls into the number three position on the grid, the crowd explodes. Ryan McKane, the meteoric newcomer who’s taking the V8 Supercar circuit by storm, leans from his window to acknowledge his adoring fans. Not yet World Champion, but far from the unknown test driver of just a few short months ago, Ryan’s career has its foot hard on the gas pedal, powering towards the chequered flag.
Release date Australia
January 8th, 2004
Game Platform
Publisher
Atari
UPC
9324567009704
Product ID
1461813