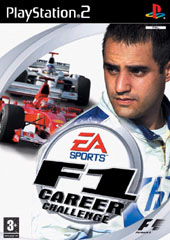 Well, at first, this game seems like it is really going to suck, but once you get the hang of it, thing arnt as bad as they first seemed.

But with 4 full seasons, the enthusiasm seem to wear pretty thin, but the new cars and drivers that come by every year, seem to wake you up a bit, my advice, would to try and finish it as fast as you can, within a few weeks, or else it start to get a bit boring.

Some plus sides about this game, is that you play as you, and can choose your own helmet, but there is one thing i dont like about it, some times the AI drive straight through the pits, and win the race, because they didnt actually stop, but you did, and finish only a few seconds behind them, and soem times, if qualifyings wet, youll start the race the next day, on wet tyres, even if its dry.

Also the game dosnt include the 2002 Nurburgring track, which was a little dissapointing, but has all the other tracks from the 1999, 2000, 2001 and 2002 Formula One World Championship.

F1 Career Challenge is officially licenced by Formula One Administration Limited and positions you as a rookie who must prove your worth within the games career mode by passing a range of super licence tests, where upon you can take your rightful place amongst the elite drivers competing in the world's fastest and most glamorous motor sport.

Reputation will determine how far your career can take you and with which team. Develop and hone your car during test days where improvements will start to show over 4 successive seasons on the FORMULA ONE circuit.

LICENCED F1 CAREER MODE — Start off as a rookie driver without a super licence and prove you have what it takes. After you earn your licence, you must compete for a ride, develop your skills, complete test days and build your reputation over four successive years — can you win the world championship?

RACE AS YOURSELF — Create yourself as a driver in the game to challenge real-life F1 stars. Select your own helmet design and the pinnacle achievement – see your name at the top of the leader board.

FULL DATA FROM FOUR REAL-LIFE SEASONS — EA SPORTS F1 Career Challenge* is truly authentic with unrivaled detail over the 1999–2002 seasons. Every car, driver, track and team change from this era is in the game, with details like Mika Salo completing the 1999 season, taking over from Michael Schumacher following the British Grand Prix at Silverstone.

INTENSE RACE ATMOSPHERE — Completely overhauled gameplay in F1 Career Challenge delivers the most immersive and realistic F1 racing experience to date. With radically improved AI, other race drivers take on their real-life personalities allowing them to experience racing incidents. The 3D garage comes to life with motion-captured mechanics and options screens selectable from within the car.

SPOT ON FEEDBACK — Get the same timely feedback F1 drivers get, via headset radios from your Chief Mechanic on the track and from your Team Boss off the track.