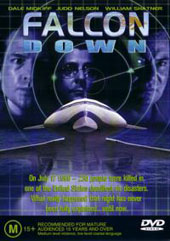 The biggest military project in history, the XB 1000 Mach VI bomber known as the Falcon Project is cancelled following a major disaster during it's first test flight.

Undaunted, a group of ex-military strategists continue to develop the stealth in secret, knowing that once complete, a sale to the Chinese for billions is assured.

A team of experts is assembled to hijack the plane, including the one man capable of flying the new stealth technology, Hank Thomas, a staunchly American fighter pilot who unwittingly becomes involved in the operation.

Once on board, the hijack begins, and the Russian-trained commandos demand that Hank land on an Arctic ice cap where the real battle for survival begins. The ice is too thin to support the extraordinary weight of the Falcon. Thousands of feet beneath the surface Hank must not only battle the ruthless commandos but also escape the icy grave which threatens the very fabric of National security.