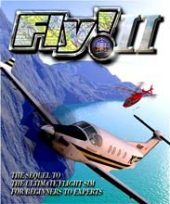 Unavailable
Sorry, this product is not currently available to order
Terminal Reality presents FLY! II, the sequel to the technologically-advanced general aviation simulation FLY!. Powered by the Photex3 graphics engine, FLY! II takes you into new territory, with a new, exclusive aircraft- the Pilatus PC-12 Turboprop- as well as more points of interest, improved visual effects, dynamic environments and thorough tutorials, instructions and assistance for beginners.

With pre-configured single user adventures, downloadable community adventures, and extended multiplayer flight parties, FLY! II is sure to be one of the most challenging flight-sim experiences ever delivered!