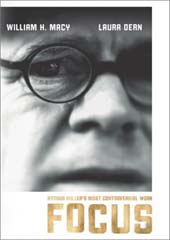 Everything Is About To Become Very Clear.

In a small Brooklyn neighborhood towards the end of World War II, an ordinary man named Lawrence Newman and his wife live a good and quiet life. Once he happens to get eyeglasses, however, his neighbors begin to perceive him differently through that subtle change in his appearance, and soon he and his wife are mistaken for Jews. Finding themselves suddenly aware of their anti-Semitic neighbors, they befriend a local Jewish immigrant and struggle for their dignity and survival.