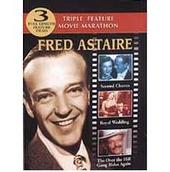 Director H.C. Potter keeps the pacing snappy in this musical comedy about two trumpet-playing buddies competing for gigs and for the heart of their lovely manager, Ellen Miller (Paulette Goddard). When Ellen gets hired and moves away, the two decide to leave their college campus and follow her to New York. Once there, they have numerous misadventures while auditioning for a spot in conductor Artie Shaw's band. Artie Shaw confidently plays himself, and Fred Astaire and Charles Butterworth are both sweet and funny as Danny and Hank, the feuding friends. Some of the film's notable songs include “Would You Like to Be the Love of My Life,” “Poor Mr. Chisholm,” and “Swing Concerto.” Paulette Goddard and Fred Astaire have one breezy accomplished dance number in the film, which was shot in one take under protest from Goddard, who swore after hours of tutoring from the master that she just couldn't dance. The rest of the numbers are danced solo by Mr. Astaire who is a joy to watch.

Dancing and romance collide in ROYAL WEDDING as a brother-sister dance team (Fred Astaire and Jane Powell) open their musical show in London shortly before the English royal wedding and find love of their own. Showcasing some of Astaire's most memorable dance scenes in film history–Astaire's hat-rack partner and his dancing on the ceiling (impressive even to those jaded by special effects)–this tale of finding true love when it's least expected, and least wanted, has delighted audiences since the movie's release in 1951. Flirty Ellen and dance-focused Tom have escaped the clutches of many marriage-minded partners, keeping their joint entertainment careers their first priority. When they leave New York to sail for London to open a new musical show, Ellen leaves behind many besotted men but no regrets. But when a ladies' man (and lord) falls hard for Ellen, and a British girl in the dance chorus needs Tom's help to locate her fiancé, both brother and sister realize that this time love must come first.

THE OVER THE HILL GANG RIDES AGAIN:

Originally made for TV, this second Over the Hill Gang misadventure follows Walter Brennan, Edgar Buchanan, Chill Wills and Andy Devine through the Old West. Out to rescue their friend the Baltimore Kid (Fred Astaire), the Gang encounters old foes, old friends, and plenty of new comic action.