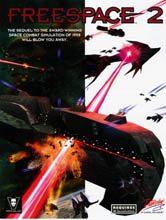 Unavailable
Sorry, this product is not currently available to order
The drama of the award-winning space combat simulation of '98 continues in FreeSpace 2, featuring massive juggernaut warships, jaw-dropping visual effects, and white-knuckle dogfight action. Explore a vast, enigmatic nebula and battle a mysterious adversary over the fate of humanity. The year is 2367. Thirty-two years have passed since the Great War. The only jump node to Sol collapsed long ago, isolating Earth from the Galactic Terran-Vasudan Alliance (GTVA), a new government uniting old enemies. As the Terrans and Vasudans struggle to rebuild their civilizations, civil war erupts in the Polaris system. A rogue Terran admiral declares war against the Vasudans, and his rebellion threatens the stability of the Alliance. Without warning, the Shivans return, and the GTVA launches a crusade to eliminate their Great War nemesis. Once again, the Alliance must crush the Shivan onslaught or else face annihilation.

* A single-player campaign with over 30 missions. New scenarios include flying with Vasudan squadrons, piloting advanced stealth fighters, and "painting" targets with TAG (Target Acquisition & Guidance) missiles.
Command up to eleven squadmates in battle. Order them to defend, attack, disarm or disable your target.

* With over 60 turrets, Juggernauts span six kilometers from bow to stern and are virtually indestructible.
Stealth fighters are engineered to minimize their EM signatures, rendering them invisible to sensors except at very close range.

* AWACS enable allied ships to target hostiles in the volatile environment of the nebula.

* Up to 12 players can battle in dogfight, team vs. team (8 players max.), and cooperative missions via LAN, TCP/IP, and modem.

* "SquadWar" pits squadron against squadron in a multiplayer battle for control of the universe. PXO tracks the results.

* Create and customize singleplayer and multiplayer scenarios with FRED 2, the new and improved mission editor. Exchange missions with other designers in the FreeSpace on-line community.