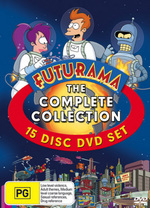 Almost perfect however does not include the movies that were released last year, I recommend buying them also as they are amazing!

I love futurama as its got good graphics from point go as the makers of the simpsons were already pro at the animations when they started season 1 :D

What can I say except funny lolz!!!

This is the first time Futurama has been available as a complete boxed set!

From New York City, to outer space and parts beyond, this future is like none you've ever imagined... Fry was a 25-year-old pizza delivery boy whose life was going nowhere. After accidentally freezing himself on New Year's Eve, 1999, he woke up 1,000 years in the future with a chance to make a fresh start in a future full of weird aliens and angry robots.

He now works for Planet Express, an intergalactic delivery service that transports packages to all five quadrants of the universe. His companions include the Planet Express ship's captain, Leela (a beautiful one-eyed female alien who kicks some serious butt) and Bender (a robot with very human flaws, including drinking, smoking, petty theft and a weakness for robot pornography), plus many more!!