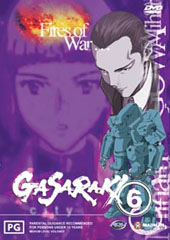 Unavailable
Sorry, this product is not currently available to order
As Yushiro and Miharu seek to escape, the seeds sowed by Symbol and Gowa begin to reap their bitter fruit. Like dominoes toppling over one by one, the barriers holding back the fires of war begin to crumble and the future of Japan hangs. Now only the actions of a few human pawns can tip the scales away from the edge of the abyss. Trapped and alone, Yushiro and Miharu find themselves aided by an unexpected ally and betrayed by another in the sixth spectacular collection of Gasaraki! Special Features:
Release date Australia
January 1st, 2007
Movie Format
DVD Region
Edition
Brand
Aspect Ratio
Language
English, Japanese
Length (Minutes)
75
Studio
Vendetta
Subtitles
English
Supported Audio
Genre
Original Release Year
2002
UPC
9322225001541
Product ID
1460091