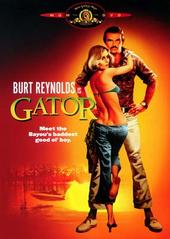 Burt Reynolds returns as Gator McKlusky, the moonshine-running king of the Bayou, in this high-octane sequel to White Lightning. Filled with super-charged adventure and double-barreled action – and co-starring Lauren Hutton as a sexy TV reporter – Gator is a fast-and-furious ride you won't want to miss! The Feds want Gator. Not for moonshining, but to go undercover to expose Bama McCall (Jerry Reed), Gator's boyhood pal who is now a local crime boss. Gator is reluctant at first, but once he discovers Bama is involved in extortion, prostitution…and murder, the suspense builds to an explosive climax, as old friends become deadly enemies.