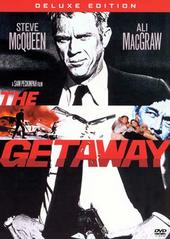 Master thief Doc McCoy knows his wife has been in bed with the local political boss in order to spring him from jail. What he can't know is the sinister succession of double-crosses that will sour the deal once he's on the outside - and executing the ultimate robbery.

Fasten your seat belts and join Steve McQueen and Ali MacGraw in a supreme action thriller based on Jim Thompson's novel. Sam Peckinpah directed, filming on locations across Texas and in sequence - from the opening inside Hunstville State Prison to the explosive El Paso border climax. Once The Getaway starts, there's no escaping its breathless intensity.