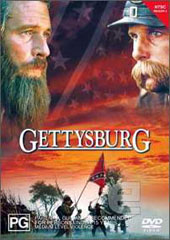 No CGI just re-enacters that lived and sleeped the civil war down to the belt buckle! Everything is as is was then. Re-enactors didn't charge($$$) anything it was there goal to portray this battle as it was with no pay.

They slept in the tents that the civil war boys did at the site. If you want to watch a movie that the people in it had no goal but to portray it as it was for free then this is it!

The final picketts charge you will see 15,000 re-enators charge 1 km under cannon ball then grape shot.

Richard Anderson is my favourtie actor here he plays Gen Lou Armistead of the confederates(rip).

I have owned all war films.....i hold this as my dearest film!

1 out of 1 people found this review helpful.
On July 1, 1863, more than 150,000 soldiers were drawn by fate to the defining moment of the Civil War. Men of honor in an age when honor meant everything, they fought out of loyalty to country or homeland, or to preserve states' rights; many more were moved to the defense of individual freedom. When it was over, a third of their number lay wounded or dead in the quiet wheat fields outside Gettysburg, PA. The Union Army had prevailed. The Republic would survive. Based on Michael Shaara's Pulitizer Prize-winning novel "The Killer Angels," GETTYSBURG dramatically depicts the three most courageous days in American History as experienced by the leaders of the Confederate and Union Armies. The film renders the human dimension of the war with passion and power--from the fierce disagreements of Generals Longstreet and Lee, the brilliant Confederate leaders, to the Union's General Buford, who foresaw the devastation ahead.