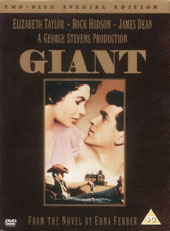 Unavailable
Sorry, this product is not currently available to order
The legendary epic that's as big as Texas.

Living up to its title, everything in director George Stevens' Giant is big, from the running time to the sprawling ranch location and the high-powered stars. Rock Hudson stars as the confident, stubborn young ranch baron Jordan 'Bick' Benedict, who woos and wins the hand of Southern belle Leslie Elizabeth Taylor, a seemingly demure young beauty who proves to be Bick's match after she settles into the family homestead. The film features James Dean's final performance before his tragic death, as poor former ranch hand Jett Rink, who strikes oil and transforms himself into a flamboyant millionaire playboy.