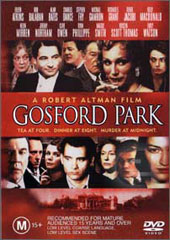 The various intrigues that play out between members of the different classes and sexes are all observed with Altman's customary withering eye and trademark roving camerawork. After a murder is committed, comical pipe-smoking detective Stephen Fry arrives, but the solution is arrived at in an unconventional way. With an impeccable ensemble cast that Merchant Ivory would die for, Gosford Park is a classy piece of cinema from a great director at the top of his form.