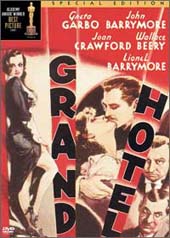 At a luxurious Berlin hotel between the wars, the once-wealthy Baron Felix von Gaigern (John Barrymore) supports himself as a thief and gambler. In this lavish adaptation of the successful Broadway play, the baron romances one of his marks, the aging ballerina Grusinskaya (Greta Garbo), and teams with dying accountant Otto Kringelein (Lionel Barrymore) against his former boss, crooked industrialist Preysing (Wallace Beery), and his ambitious stenographer, Flaemmchen (Joan Crawford).