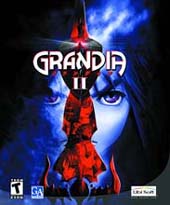 The game wasn't too bad. for the PC though it felt like it was a quick job and not much effort went into it. I've played the first one which was amazing and took a while to finish, but the second doesn't take too long at all.

If you are searching for a quick rpg with a good storyline then this is a good game for you! But, try to get on PS2. If you don't have a PS2 or PS3 you'll just have to settle for the PC one…

Grandia is one of the most under-rated RPG series on the PS2 in my opinion. I have played Grandia 1,2 and Xtreme on PS2 and they are all top quality games and With Grandia 3 due for release shortly in Japan the series is alive and kicking.

The game is essentially a turn based RPG that will appeal to anyone that enjoys the likes of Final Fantasy, Wild Arms, Star Ocen, Xenosaga etc. Some of the more unique features are an excellent battle system that is quite widely considered one of the best ever created for an RPG and the fact that there are no real random battles. The monsters can be seen when walking around and can be avoided or attacked to try and get the early advantage. The small changes made to the tried and true RPG formula give the game enough of its own unique flavour to make it stand out in the crowd.

Unfortunately the PC version was a bit of a half-hearted port from the PS2 and it feels like there wasn't much effort put into the port. I don't see anything missing but the interface looks a bit tacked on. Still, if you don't own a PS2 or can't get hold of the PS2 version I would recommend you try it. You can't go far wrong for the price.

Ryudo has been sent to protect a young priestess who has to participate in a ceremony in a distant land. Interact with dozens of characters and immerse yourself in this deep, rich and captivating role-playing game.

Each Shall Rise to Face Their Destiny.