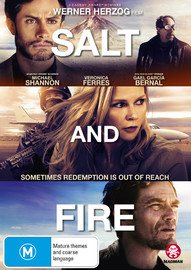 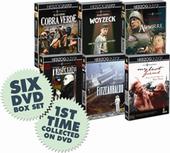 Unavailable
Sorry, this product is not currently available to order
For the First time on DVD. The collected works of cinema's most infamous duo!! Many great directors have that one special actor with whom they become associated forever. John Ford had John Wayne. Federico Fellini had Marcello Mastroianni. And Werner Herzog had Klaus Kinski.

Together they produced five epic films. Together, they moved to, and often beyond, the brink of insanity. When Klaus Kinski told director Wernor Herzog that he was leaving the set of Aguirre, only a few scenes before the end, Herzog promised to track him down and shoot him. Kinski finished the film. The final scene is a classic of modern cinema.

Aguirre, the Wrath of God
A breathtaking journey into the heart of darkness! Kinski plays a crazed Spanish conquistador in an unforgettable portrait of madness and power.

Cobra Verde
Kinski, in his final collaboration with director Herzog, stars as Cobra Verde, the barefoot South American bandit and slave trader who aspires to be King in his newly-adopted African homeland.