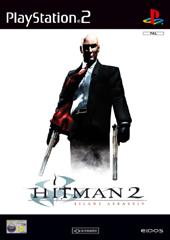 This game is alright it is better with cheats on

Take stealth action or cap everybody with lead.

You must enter the mind of a genetically engineered assassin Codename 47, whose deadly efficiency is now needed more than ever. Lured back into a global ring of deception, you must kill not only to make a living, but to continue living. This time it's not just business. It's personal. Hitman 2's storyline begins in a Sicilian monastery. Codename 47 has been attempting to distance himself from his violent past, however the local criminal underworld discover his true identity and blackmail him into returning to his trade. Caught in the middle of a ring of deception, Codename 47 soon discovers that he has been manipulated and the hunter must now watch his back, as he has become the hunted. Hitman 2 will improve on the original in every conceivable way. The game offers a variety of ways to complete a mission, 1st and 3rd person perspective, mid-mission save options, a new ranking system and a revised inventory system that allows you to acquire and carry weapons and equipment from mission to mission. Codename 47 is armed with an arsenal of over 30 weapons such as pistols, sub-machine guns, shotguns and sniper rifles. You also have access to new non-lethal weapons and pacifying gear including chloroform, poison darts, stun guns and fibre wire for garrotting. Missions take place in countries across the globe and each location features inhabitants speaking in their native tongue. To further heighten the dramatic atmosphere the game's music has been composed and performed by the Budapest Symphonic Orchestra. Features:
Release date Australia
December 3rd, 2006
Game Platform
Publisher
Eidos Interactive
UPC
5032921017374
Product ID
1456946