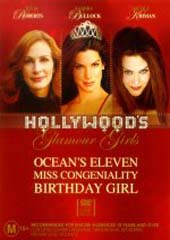 As a follow on to her Academy Award winning role in Steven Soderbergh’s ‘Erin Brockovich’, Julia Roberts re-teams with this gifted director for her coolly elegant portrayal opposite George Clooney in the Rat pack inspired OCEANS ELEVEN.

MISS CONGENIALITY is the film that made Sandra Bullock a superstar and forged her reputation as a comedienne of the highest order. From the writer of ‘2 Weeks Notice’, ‘Miss Congeniality’ deftly illustrates Sandra’s brilliant talent for physical comedy- nobody falls off a beauty pageant podium with as much grace and gusto.

If you think ‘The Hours’ sheds new light on Nicole Kidman’s versa­tility as an actress, then you haven’t seen her extra-ordinarily brave performance as a Russian mail order bride in the edgy black comedy, BIRTHDAY GIRL.

Unrecognisable from the red carpet’s blonde beauty, Nicole inhabits this demanding role with poise, depth and complexity. Once again she proves she is that rare combination of major star and fine character actress.