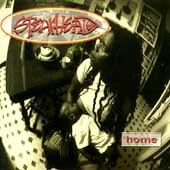 Former Disposable Heroes Of Hiphoprisy singer Michael Franti's second life as the frontman for Spearhead shows that he's got more on his mind than being the hip-hop equivalent of Gil Scott-Heron. While Franti retains the wordy, iconoclastic approach he favored with the Heroes, Spearhead allows him the freedom to explore different musical avenues. HOME moves deftly from gutbucket funk to progressive R&B to rap, with lyrics that manage to be both personal and political.

While dealing with such serious subjects as AIDS ("Positive"), poverty ("Hole In The Bucket") and violence ("Piece O' Peace"), Franti never loses his wry, ironic sense of humor. He leavens his weightier material with clever observations delivered in a deep, soulful voice. Spearhead's HOME is the common ground where contemporary urban styles converge to create a fresh new sound.