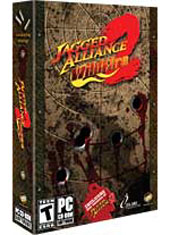 While being a big fan of its first incarnation all those years ago, a word of warning: I have been unable to, as yet, find a solution to the Version 6.02 of Wildfire and Vista Large amounts of time spent searching the net for a solution, has resulted in me being disgruntled – all because I cant fit my serial key into the program to run it.

Wildfire adds some new weapons, changed maps and terrain like long grass, but fails to deliver a solid story. For the most part they should have just revamped the graphics and contents rather than try to add a new story line that you really don't hear much about after the initial contact. You don't encounter “drug barons” or anything of the sort. Also, this version is 5.0, I recommend waiting for version 6.0 as it not only has all the previous additions but upscales the resolution to 1024×768 (which really helps when you have a 22inch screen like I do) and replaces about a dozen of the mercs with much better ones.

Overall, the graphics are totally outdated by todays standards, the sound and voice acting can be irritating and poorly scripted at times (especially the newly added character lines) but despite all that, it can be fun and challenging – not as hard as some people make it out to be and the new weapons can make up for that.

Note: you may have some issues trying to get it to work on a Vista PC, try using compatibility mode.

Hasn't added much to JA2. Opposition is harder. Maps have been modified. Bit dissapointing. If you haven't played JA2 then this is a fun little game. But you'd be better buying JA2 as it's a lot easier.

Arulco’s economy has completely collapsed and the country has now become a base for international drug cartels. Export of precious metals, which was the foundation of Arulco’s economy, is now just a cover for the extensive export of drugs into North America.

The North American Drug Agency has been unable to affect the export of drugs through regular diplomatic channels due to the cartels’ influence and has been forced to take more specific action to stop the drug trade. You are sent in as a leader of a small band of hired guns, your mission: the elimination of all key personnel of the Arulcan Government and, if possible, the complete extermination of the drug cartels. If successful, you will be hailed as heroes. If you fail, the Agency will deny all knowledge of the operation.

Wildfire includes modifications to all aspects of the original game. Changes were made to all weapons, landscapes, structures, missions, enemies and the AI. All elements within the game were altered to make it more realistic, bringing it closer to real-life.