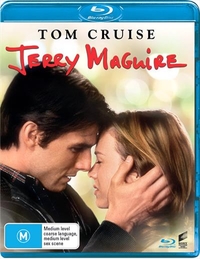 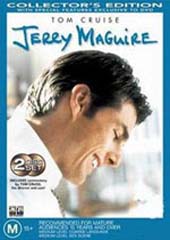 Show me the money! Tom Cruise is Jerry Maguire. He's popular, he's a top notch sports agent, and he's at the top of his game. He's unstoppable, but driven by his conscience he writes a ‘mission statement’ of a new belief that is quality not quantity, the people not the money, that really counts. Fired as soon as his boss reads the statement Jerry is soon stripped of his friends, fiancée and self-respect, and is forced to start from scratch. The only two people who stand by him are his sole remaining client, Rod Tidwell, a second-rate football player (Cuba Gooding Jnr) and Dorothy Boyd (Renee Zellweger), a single mother inspired by his statement and zest for life.

Only through his shared journey to success with Rod and his relationship with Dorothy and her son does he begin to understand the values that really matter. Jerry Maguire was nominated for 5 Academy Awards including Best Picture, with Cuba Gooding Jnr winning Best Supporting Actor award. Tom Cruise also earned a Golden Globe for his acclaimed performance as Jerry.