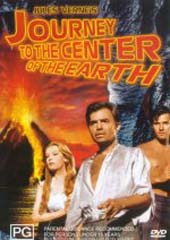 When I was a young lad my father read me the book of this story and it became one of those personal favourites Ive always loved. The Great James Mason leads this adventure which in 1959 cost 20th Century Fox a bundle for its day,for one particular scene you will see immediately where Gearge Lucas and Steven Speilberg came up with a certain scene for Raiders Of The Lost Ark,yet considering the movie is over 2 hours long you find yourself captivated and along for the ride as these bold travellers journey towards the centre of the earth,interestingly in 1974 Rick Wakeman recorded a live musical version of this story and it itself is a stunning piece of work.This is a worth while item to add to your collection,if you love movies of old where the impossible was made to look possible then you wont be dissapointed.

A geologist (James Mason) and his assistant (Pat Boone) set off on an expedition to the center of the earth. Following directions found in an inscription hidden in volcanic rock, the explorers travel to a volcano in Iceland to begin their journey. Along the way, a widow of a famous scientist (Arlene Dahl) and an Icelander (Peter Ronson) join their party. However, the treacherous terrain and prehistoric monsters are not their only concern when a rival scientist (Thayer David) is on their trail.